As we age, the stem cells in all tissues of our body are depleted or fail to function efficiently. This is what drives the age-associated decline in tissue function and the onset of age-related diseases such as cancer. The loss of stem cells is thought to be predominantly driven by accumulative damage to the DNA of stem cells. However, the source of this DNA damage in stem cells has previously been unclear. In a study just published in the journal Nature, scientists at the Deutsches Krebsforschungszentrum (DKFZ) Heidelberg and at the Institute for Stem Cell Technology and Experimental Medicine (HI-STEM gGmbH) have uncovered that environmental stress is a major factor in driving DNA damage in adult hematopoietic stem cells. Repeated exposure to such stress causes accelerated tissue aging and probably cancer. 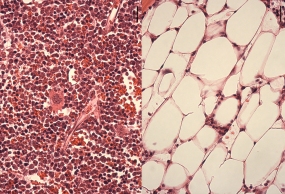 After waking up the hematopoietic stem cells, bone marrow of normal mice (left) is packed with blood cells whereas the bone marrow of Fanconi mice is severely depleted, the blood cells have been replaced by fat cells. | © Michael Milsom, DKFZ

However, under conditions of stress, such as during chronic blood loss or infection, hematopoietic stem cells are driven into a state of rapid cell division in order to produce new blood cells and repair the damaged tissue. “It’s like forcing you out of your bed in the middle of the night and then putting you into a sports car and asking you to drive as fast as you can around a race circuit while you are still half asleep,” explains Milsom. “The stem cells go from a state of rest to very high activity within a short space of time, requiring them to rapidly increase their metabolic rate, synthesize new DNA and coordinate cell division. Suddenly having to simultaneously execute these complicated functions dramatically increases the likelihood that something will go wrong.”

Indeed, experiments described in the study show that the increased energy demands of the stem cells during stress result in elevated production of reactive metabolites that can directly damage DNA. If this happens at the same time that the cell is trying to replicate its DNA, then this can cause either the death of the stem cell, or potentially the acquisition of mutations that may cause cancer.

Normal stem cells can repair the majority of this stress-induced DNA damage, but the more times you are exposed to stress, the more likely it is that a given stem cell will inefficiently repair the damage and then die or become mutated and act as a seed in the development of leukemia. “We believe that this model perfectly explains the gradual accumulation of DNA damage in stem cells with age and the associated reduction in the ability of a tissue to maintain and repair itself as you get older,” Milsom adds.

In addition, the study goes on to examine how this stress response impacts on a mouse model of a rare inherited premature aging disorder that is caused by a defect in DNA repair. Patients with Fanconi anemia suffer a collapse of their blood system and have an extremely high risk of developing cancer. Mouse models of Fanconi anemia have exactly the same DNA repair defect as found in human patients but the mice never spontaneously develop the bone marrow failure observed in nearly all patients.

“We felt that stress induced DNA damage was the missing ingredient that was required to cause hematopoietic stem cell depletion in these mice,” says Milsom. When Fanconi anemia mice were exposed to stimulation mimicking a prolonged viral infection, they were unable to efficiently repair the resulting DNA damage and their stem cells failed. In the same space of time that normal mice showed a gradual decline in hematopoietic stem cell numbers, the stem cells in Fanconi anemia mice were almost completely depleted, resulting in bone marrow failure and an inadequate production of blood cells to sustain life.

“This perfectly recapitulates what happens to Fanconi anemia patients and now gives us an opportunity to understand how this disease works and how we might better treat it,” commented Milsom.

Prof. Dr. Andreas Trumpp, director of HI-STEM and head of the Division of Stem Cells and Cancer at the DKFZ believes that this work is a big step towards understanding a range of age-related diseases. “The novel link between physiologic stress, mutations in stem cells and aging is very exciting,” says Trumpp, a co-author of the study. “By understanding the mechanism via which stem cells age, we can start to think about strategies to prevent or at least reduce the risk of damaged stem cells which are the cause of aging and the seed of cancer.”